Some of the best known Brazilian dishes have originated in the southeast where Rio de Janeiro is situated. Many of the restaurants in Rio serve local traditional food from Rio as well as the surrounding areas such as Minas Gerais and Espirito Santo. 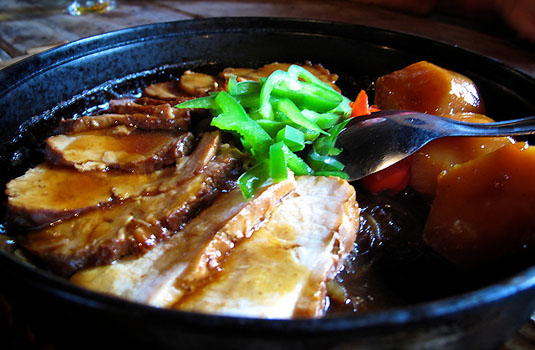 Specialties that come from Minas Gerais are usually made with chicken, pork, beans and corn. One of the most traditional dishes is frango com quiabo (Okra with chicken). Local cheeses usually accompany this chicken served with okra. Farofa is another popular dish made of manioc flour with onions, pork, eggs and vegetables as are polenta, chourico; a mild sausage and fried bananas.

São Paulo is considered a melting pot of Brazil and local fare combines Middle Eastern and European influences. The most popular dish in São Paulo is Virado a Paulista made of rice, a paste of manioc flour and beans, pork chops and sautéed collard greens. It is usually served with sausage bits, pork rinds, fried bananas or fried eggs.

In this city cuisine is influenced by German and Italian dishes. The official dish of the area is Moqueca Capixaba and is a fish stew with tomatoes cooked in a clay pot.

Feijoada is a traditional dish rooted in African cuisine and made with meat and black beans. It is usually served in Rio on Wednesday and Saturdays. Another popular dish is feijao com arroz or beans and rice. Tutu a Mineira with manioc flour and bean paste is served in all traditional Brazilian restaurants. Polenta, couve and bisteca can all be found on the menu of local restaurants. Cafes, kiosks and street vendors commonly serve salgadinhos. These salgadinhos usually consist of cheese bread, chicken croquettes, meat cakes, pasteis and empanadas. Sweets include cuscuz branco, tapioca with sugar and coconut milk and pao de mel a honey cake covered in chocolate.